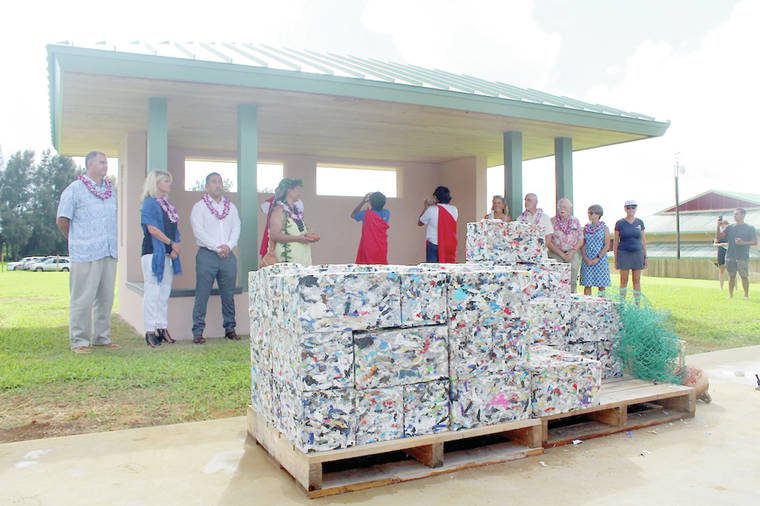 Building for the Future

PUHI — There’s a new building on Kauai made out of plastic marine debris and plastic household waste.

It’s an athletic pavilion built with blocks that resemble oversized Lego pieces. The debris that was once cluttering shorelines and endangering sea life is providing shade for athletes and onlookers at Island School.

It’s also an example of an innovative way to use the thousands of pounds of plastic gathered on Kauai each month.

Not only is the building the first on Kauai to be made out of the blocks — a product of the New Zealand-based ByFusion Company — it’s the first in the United States.

“This demonstrates to the world how to combat the plastic crisis that’s plagued our oceans,” said ByFusion Company’s Chief Executive Officer Heidi Kujawa, who attended Wednesday’s blessing of the building.

“You really raised the bar today,” Kauka said before she began the blessing. “What you see is a beautiful building, but what it represents … (I’m) excited to be the first in Hawaii for something like this.”

The blocks form the walls of the pavilion, and the spaces in between are filled with traditional building materials like rebar, stucco and trusses. The building is about 20 feet in length and is situated by the school’s soccer field.

Each block is made out of shredded, cleaned plastic waste compressed into a solid rectangle at ByFusion’s only processing facility in New Zealand. They’re touted as a cheaper form of construction because they’re lighter and require fewer materials for building.

Stucco covers the plastic blocks, sealing them and the gasses they produce should they decompose.

Carl Berg, senior science adviser for Surfrider Kauai, says the long-term goal is to bring a ByFusion facility to Hawaii. That would bring manufacturing of the blocks closer to home and present a real potential for recycling marine debris in the state.

The cost of that was originally estimated between $1 million and $3 million. However, Kujawa says the cost could be lower.

Mayor Derek S.K. Kawakami looked over the blocks and said he’d love to put structures made from the blocks in parks all over the island.