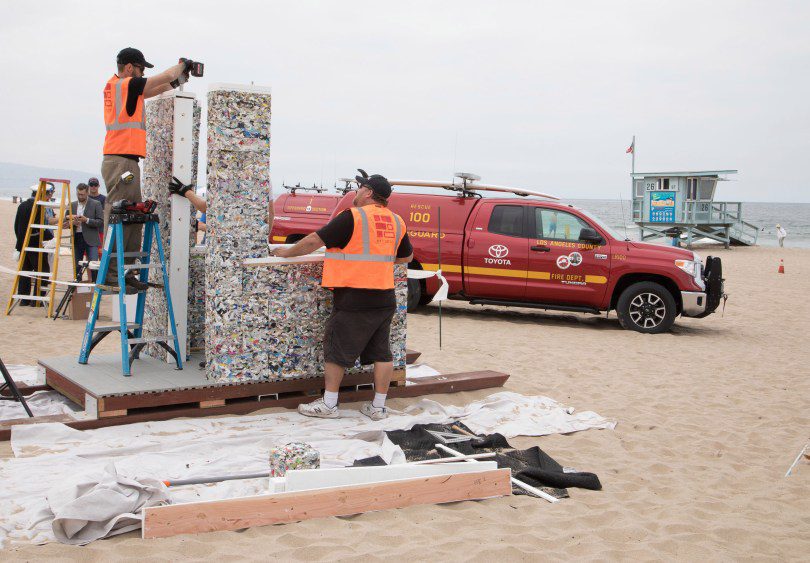 The lifeguard tower being built Saturday on Bruce’s Beach in Manhattan Beach is not just another oceanfront lookout.

The tower, erected as part of that beach’s World Oceans Day activities, could part of the solution to the scourge of plastic pollution, a large portion of which ends up in the ocean.

That’s because the structure was built with bricks made from discarded plastic.

While most recycled plastic uses require a specific chemical makeup, the innovative ByFusion bricks used Saturday can be made with any mix of recyclable plastics — Nos. 1 through 7 — except for polystyrene. They don’t need to be pre-washed or sorted, according to company literature. And these “ByBlocks” are stronger than cinder blocks and can be similarly covered with paneling or stucco.

“The waste management-recycling industry is in a critical state and must change to meet the shifting market,” ByFusion CEO Heidi Kujawa said of the opportunities driving the company’s vision. “We’re entering the market at a pivotal time.”

Less than 10 percent of plastics worldwide are recycled and with China phasing out the import of recyclables, the market is rapidly shrinking. In California, plastics Nos. 3 through 7 are increasingly ending up in the landfill because of the dwindling international demand and the lack of domestic markets.

The state’s landfill diversion rate was 50 percent in 2014. But that was down to 42 percent by 2017 (the last year for which statistics are available) because of increased consumerism generated by a strong economy and a shrinking demand for recyclables.

Sacramento lawmakers are considering several additional measures to reduce plastic use and increase domestic recyclable markets, but ByFusion’s machines that transform scrap plastic into construction bricks are a step ahead of the new laws.

The company, founded in New Zealand in 2015 and about to open Los Angeles operations, is debuting its technology with plans to make it publicly available by the end of the year. Aside from a portable one-room office built from ByFusion bricks in New Zealand, the Manhattan Beach lifeguard tower and a school pavilion under construction in Kauai are the first structures built using ByBlocks.

Santa Monica-based Heal the Bay, which helped organize a cleanup at Bruce’s Beach on Saturday, applauded ByFusion’s efforts but questioned how big of a recycler it will prove to be.

“I think this is a niche product,” said Emily Parker, a marine scientist with the non-profit environmental group. “I don’t think all our buildings are going to be built from this.”

ByFusion’s Kujawa acknowledged that “not every building will be built using ByBlocks.” But she also said the product has widespread applications and the company would be publicizing possible uses in the months ahead.

Besides end uses for the ByBlocks, the company also is exploring sources for the waste that goes into making them. For instance, the company has teamed with Channel Island Surfboards and Sustainable Surf to explore recycling waste from the surfboard manufacturing process.

“This has the potential to recycle all of the surfboard foam waste in California, thus eliminating one of the biggest waste streams in surfboard manufacturing,” said Kevin Whilden, co-founder of Sustainable Surf, a non-profit that certifies environmentally friendly surfboards.

A machine dubbed The Blocker is responsible for turning the plastic debris into construction material. It shreds the plastic then uses “super-heated” water and compression to make the ByBlocks.

“The retail prices will be comparable to common hollow cinder blocks but only produce a fraction of the greenhouse gases,” Kujawa said. There are no chemicals or adhesives added in the process.

But while ByFusion is touting its bricks with promotional activities such as the lifeguard tower construction, its also trying to arouse interest in The Blocker machines its selling to make them. Kujawa said the company is currently talking to potential manufacturers of the machines in the United States and hopes to have some in use by the end of the year.

Customers are expected to be recycling centers, waste management facilities and municipalities, she said.