In a world of disposable everything, single-use plastics continue to reign supreme.

Every year, Americans generate about 42 million tons of it. And yet only 9% of that gets recycled, in part because the recycling infrastructure in the U.S. can’t keep up with the country’s plastic production, but also because some plastics simply can’t be recycled. Los Angeles-based startup ByFusion is on a mission to change that. 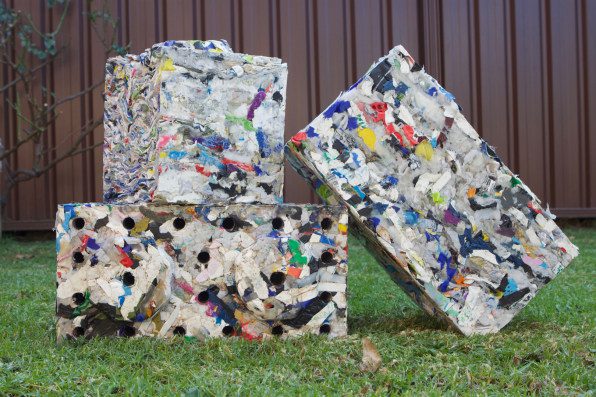 ByFusion uses a combination of steam and compression to shape all kinds of plastics, even nonrecyclables, into standard building blocks called ByBlocks. These can be used to build anything from fences and retaining walls to public terraces and bus stops, but the real stars are the patented machines used to make them. Called Blockers, these hefty machines are fed mounds of plastic that are squeezed into blocks—no sorting or cleaning needed. After years of R&D, the company has installed a full production unit in L.A., where it can process 450 tons of plastic per year, with 12 more Blockers in the pipeline across the country. 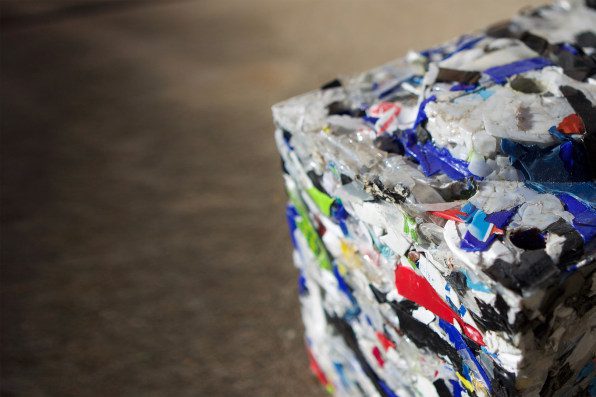 To date, the company has recycled 103 tons of plastic, with a goal of recycling 100 million tons by 2030 (about a quarter of the U.S.’s annual plastic production.) ByFusion has already partnered with a host of cities, including Boise, Idaho, and Tucson, Arizona. In Lihue, on the Hawaiian island of Kauai, the company worked with an elementary school to build a pavilion with blocks made from locally collected marine debris and fishing nets. The ultimate goal? To sell Blocker machines to every city in the U.S. and abroad, helping municipalities take control of their plastic waste and turn it into building material. 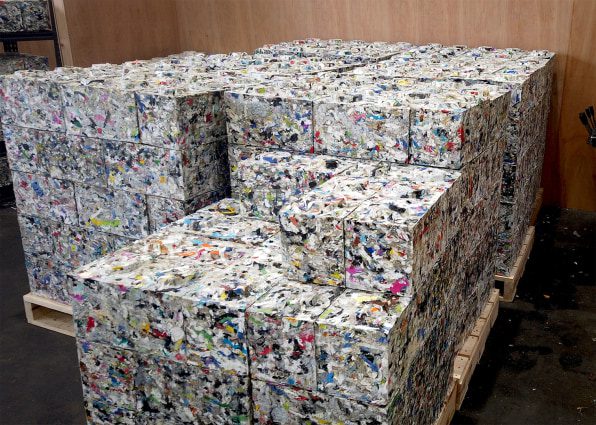 ByBlocks come in a standard 16-by-8-by-8-inch building-block size and three variations: Some are molded with pegs so they can interlock; others are flat so builders can easily mount other components like a roof on top; and others are a combination of the two. ByFusion is also working on developing smaller, cube-size blocks.

The blocks are 10 pounds lighter and more durable than hollow cement blocks. They can be clad with any kind of material or left exposed, but since plastics are susceptible to sunlight, outdoor projects would have to be coated in clear paint or paired with another weather-resistant material.

The system works with virtually any kind of plastic, including fishnets, but excluding Styrofoam. And because the plastic isn’t melted but fused (hence the company’s name), it doesn’t require an ounce of adhesive, glue, or mortar. As a result, the process yields no waste whatsoever: 22 pounds of plastic makes a 22-pound block. “You [can] literally eat your lunch, throw in [the leftover plastic], make a block, then stick it in the wall,” says Heidi Kujawa, who founded ByFusion in 2017.

In 2019, ByFusion partnered with the Hefty EnergyBag program and the city of Boise, which asked its residents to separate their hard-to-recycle plastics. Only 20% of residents obliged, but the effort still garnered about 30 tons of plastic grocery bags, bubble wrap, and fast-food containers that were diverted from the landfill. Instead, they were turned into building blocks, some of which were used in a local park. 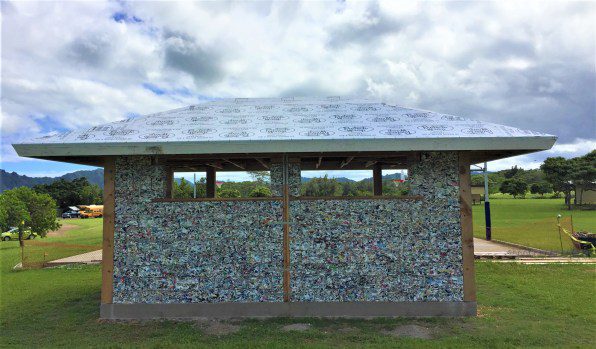 For this particular project, the plastic was processed at ByFusion’s facility in L.A. But the company wants to partner with materials-recovery facilities, municipalities, and even corporations across the country that would run the Blockers themselves. “Our primary goal is to get a Blocker in every city, to enable every city to capture their own recyclable waste,” Kujawa says.

Blockers machines come in two sizes: One is the size of a shipping container and can process up to 30 tons of plastic per month; the other is a floor-mounted affair that can process more than 90 tons per month. With a $1.3 million price tag for the large Blocker, the investment is significant, but Kujawa says recycling plastic comes with its own set of financial challenges. “Right now, this unrecyclable plastic creates a cost burden across the board, and I don’t think people realize how much taxpayer dollars go into that cost burden,” she says. Blockers are also available to rent, starting at $280,000 annually.

By now, many of us have been conditioned to think that some plastics (numbers 3, 6, and 7, for example) simply can’t be recycled, so whether an effort like ByFusion’s can truly take off would rely on quite a bit of consumer retraining and a hefty municipal effort. But if even a fraction of those nonrecyclable plastics can find a home that isn’t the landfill—or our oceans—the payoff could be tremendous. “If we get 9,000 Blocker systems installed around the world by 2025,” Kujawa says, “together we can hit our 100-million-ton goal.”

← Previous Article Next Article →
We use cookies on our website to give you the most relevant experience by remembering your preferences and repeat visits.By clicking “Accept”, you consent to the use of ALL the cookies.
Do not sell my personal information.
Cookie SettingsAccept
Manage consent

This website uses cookies to improve your experience while you navigate through the website. Out of these, the cookies that are categorized as necessary are stored on your browser as they are essential for the working of basic functionalities of the website. We also use third-party cookies that help us analyze and understand how you use this website. These cookies will be stored in your browser only with your consent. You also have the option to opt-out of these cookies. But opting out of some of these cookies may affect your browsing experience.
Necessary Always Enabled
Necessary cookies are absolutely essential for the website to function properly. This category only includes cookies that ensures basic functionalities and security features of the website. These cookies do not store any personal information.
Non-necessary
Any cookies that may not be particularly necessary for the website to function and is used specifically to collect user personal data via analytics, ads, other embedded contents are termed as non-necessary cookies. It is mandatory to procure user consent prior to running these cookies on your website.
SAVE & ACCEPT